Some lessons need to be relearned often. When we received the theme for Challenge # 20 I thought it would be easy. We had to make something black, could be basically anything. So, comfortable in the thought that it would be easy I moved on to other matters and tasks. Well, looking at my calendar yesterday, I realized that the "easy" challenge had now become not so easy because I had less than a day to complete it. Everything I was thinking of would take more than a day or I was missing something to make it happen. I wanted to make something I would use and that would push my limits just a bit at least. I already had a black bird I made but that would be cheating because I made him this summer. But as it turned out, the black bird sculpture inspired today's craft.
I created the bird after a dear friend passed away this summer from lung disease. Each textured feather represented, to me, all the procedures and needles, this poor man underwent before dying. He was ill for a long time before he passed at the young age of 52 years old.
I found out this week that I will see his wife, also a very dear friend, at a Girls Thanksgiving Party I am attending this week-end. For those of you from the US, this weekend is the Canadian Thanksgiving. I haven't been able to speak to her since her husband's death and I wanted to find a way to connect. So, I made a card that will have a message of condolences and hope! Loosely based on the black bird sculpture, I stitched strips of fabric, all in the shades of black, then appliqued a vinyl black bird shape on top. I then glued and stitched the piece onto cardstock with a couple of stamped images. I'll include the message in the card before giving it to her.
A handmade card pales in comparison to the despair she must be living but I just wish that it acts as a little comfort in her day. A little bird to follow and watch as it flies to freedom. 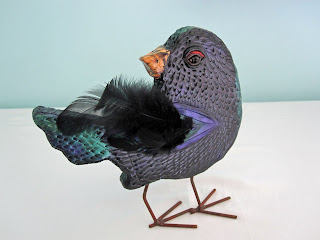 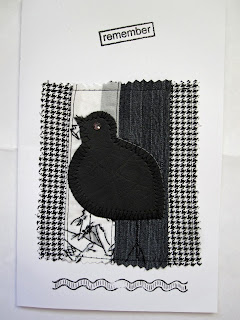